A World of Antique Maps and Prints

CLICKING ON THE ILLUSTRATION BRINGS UP A LARGE IMAGE. DOUBLE CLICK ON THIS TO MAGNIFY OR USE THE + AND x SYMBOLS TO OPEN AND CLOSE 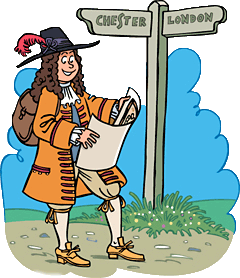 A series of early 18th century county maps and road maps. The maps are double sided.

For the county maps available please refer to the county listings of maps.

Plates 1 - 146 in stock
Plates 149 - 273 in stock
A series of early 18th century county maps and road maps. The maps are double sided. Some have a county map on one side and a road map on the reverse side. Others have a road map on both sides.

For the county maps available please refer to the county listings of maps.

These delightful and fascinating small road maps with their embellishments of coats of arms and historical notes come from an 18th century road atlas - Britannia Depicta. The strip road maps of England and Wales first appeared in 1675 with the publishing of John Ogilby's magnificent atlas Britannia, containing 100 folio sized road maps. By the first part of the 18th century there was public demand for a small road atlas that could be easily carried by travellers on horseback or for those who could afford to take a coach. There were a number of abortive attempts to produce such a handy sized atlas but others succeeded like John Senex who published his small road atlas in 1719. A year later Britannia Depicta was published by Thomas Bowles. The interesting notes that appear on the front and back of each map were compiled by the antiquarian and lawyer John Owen whilst the engraving was undertaken by Emanuel Bowen This was Bowen's first major work as a cartographical engraver for which he received a part share in the atlas in payment for his labours. The format of the atlas and maps met with the public's approval and the atlas was republished many times over the next forty years until the last edition in 1764. The double sided Road Maps each measure about 5 x 7 inches. 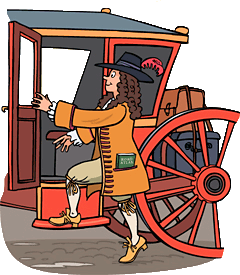 Plate Number followed by an indication of the route

for the lover of Maps, Roads and History

I was 19 when I got hooked on antique maps. There are quite a few of the early cartographers who we know a bit about about and their life stories make interesting reading. There is one English mapmaker who stands out as someone rather special who appears to have had a most interesting life. He is JOHN OGILBY. Yes you know he was the first to map the roads of England and Wales and yes you might have read that he had an interest in dancing. If you want to know more about the man who created that 17th century map hanging on your wall then you must read this book published in 2016 - The Nine Lives of John Ogilby by Alan Ereira. In this book the author brings a fascinating hidden history to light, and reveals that Ogilby's celebrated Britannia is far more than a harmless road atlas: it is, rather, filled with secrets designed to serve Charles II's sinister purpose.